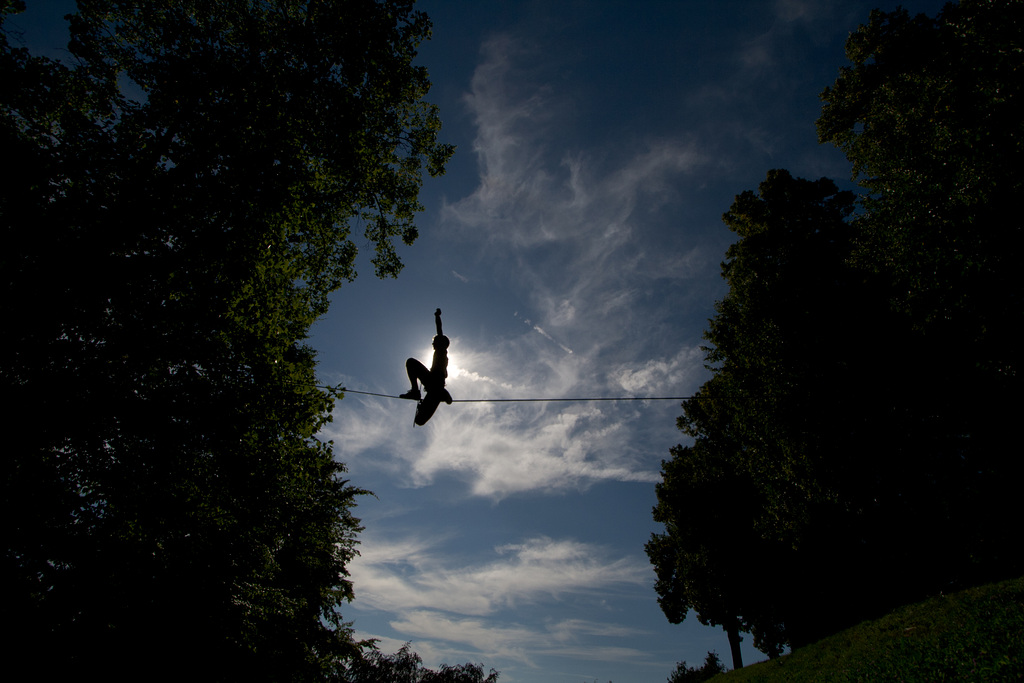 I forgot to update this for a while...
Nicolas had some shots published on RedBull.com for an article on drone photography. Check it out here. 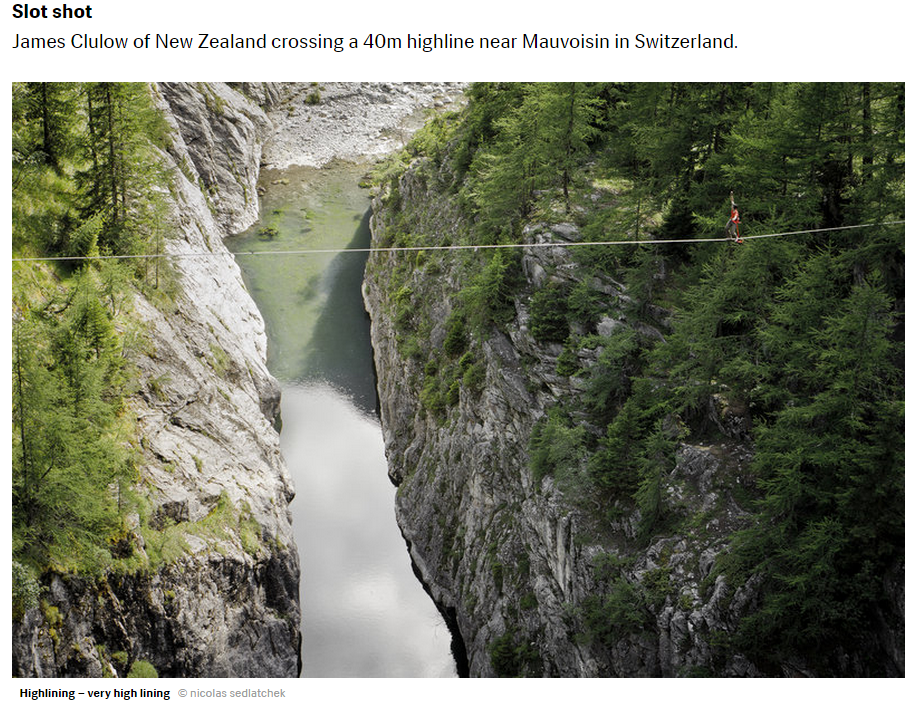 Posted by James Clulow at 12:29 PM No comments:

Our trip to NZ in 2013/2014, which was sponsored by Bächli Bergsport, lead to a lot of fantastic photos. Some of those photos have since been used by Bächli in their catalogue and Facebook page. Take a look at this one:

Featuring highlining in Mauvoisin in this months issue of the magazine 30°. The article features Alexis Gonin, Jérémy Folly, Nicolas Sedlatchek, Stéphane Bachmann, Thomas Buckingham and myself. All of this thanks to Nicolas Sedlatchek who took the majority of the photos. Nico is a very talented slackliner, architect, and photographer who lives in Sion. Nico is fond of aerial photography, taking pictures with his drone and demonstrating new perspectives on not only extreme sports like highlining, but everything in the world around us. It takes a lot of talent to take pictures like he does while all the same piloting his drone. Take a look at his website http://nicolassedlatchek.ch/

Recently, I stumbled across the photo being used for advertisement of the magazine. Take a look at these photo at the post office at the train station in Lausanne and in the parking lot at Riponne. 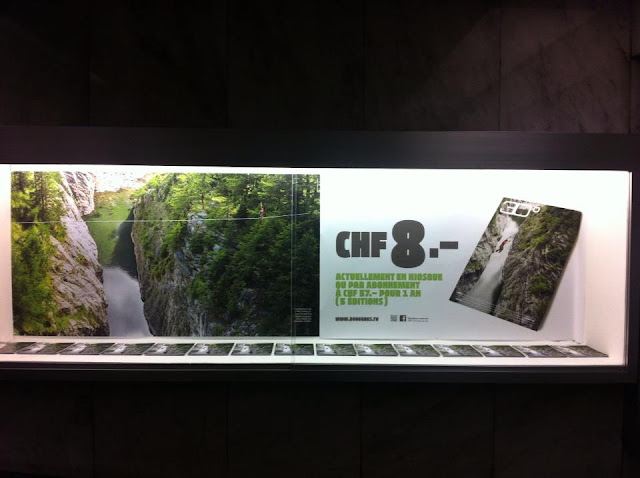 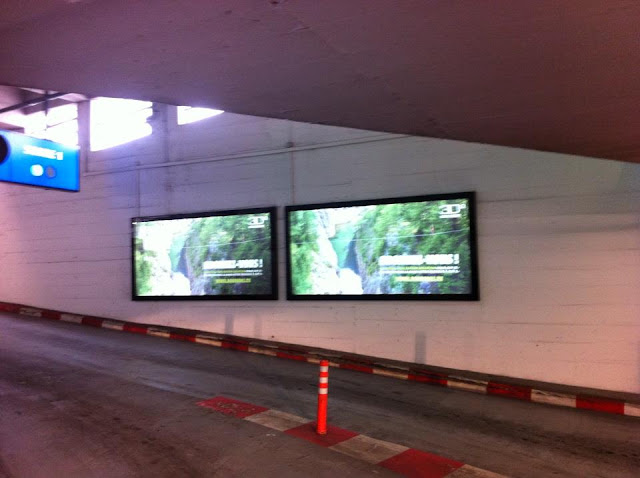 Parking Riponne
Posted by James Clulow at 11:46 AM No comments:

So, it has been a while since I last posted anything on here. Slacklining hasn't been a priority for a while after having problems with the City of Lausanne. They have effectively banned slacklining in parks around the city and as such, it is a gamble every time you go out to slack. Sometimes the Police will show up and ask you to take your line down, sometimes not. I'm sick of playing slackline roulette. It really irks me if I'm just starting to get into a training session and the boys in blue arrive. More on that issue later...

On a more positive note, in the last while, I have been focusing a lot more on climbing. Well, bouldering to be more specific. In November I sent the first my first 7B (V8) in a long time (Holy Hand Grenade - Vernayaz) with little effort [about 7 tries?] and then subsequently sent Little Nemo 7B+ (V8/V9) in Massongex. I am happy to start feeling strong again while climbing, though after three weeks in Italy over Christmas with pretty good weather, I realized that I really need to get working HARD on power endurance. I was dying on some long 35m sport routes in the cold. Perhaps I was really not warmed up enough, but the pump wasted me. I'm going to hit up the local bouldering gym today. Actually, if you are in Switzerland and haven't heard of it already, Le Cube has been a godsend for the climbing community around Lausanne. I can wholeheartedly say that Laurent, Thierry, and the rest of the team there are doing a great job to fill a gaping hole in the market. So now that I am back on track to raging on the rock, it is time to try to find the balance between slackline and climbing!

But wait, there is more! Thanks to Jérémy Folly and the Einstück Crew, I have been skiing quite a bit as well. This season has been pretty good so far and I've had some really nice days of free riding. I had an epic day at Grimentz with Jérémy and have been dying to do some more ski touring since. So the year has started with a want to incorporate skiing back into my life as well. I have always had this dilemma of juggling these three sports. Wondering whether to live in perpetual winter or summer. It tears me apart to choose between the three, but to be honest, I'm so happy when I am doing any of them. Perhaps it isn't the sports themselves, but just the mountains that make me happy?

So on to slacklining. After an almost three month hiatus from highlining, I got a txt from Stéphane. He was asking if I was keen for a line at St. Triphon. The line there is 50m long, but not super high and is a great spot for winter highlining because it is in the sun from about 10am til 5pm. So it was up early to rig the line with Stéphane and Michael. Seb joined us later. We rigged it on Core webbing from Landcruising with a 9mm static rope backup. The line was heavy, but in the end, really nice to walk on. It had strong movements, but they were slow and easy to walk with. Stéphane and Michael had a few goes on the line as I prepared myself to walk. After relaxing a bit, trying to get warm, and finding the right music, I pulled off my shoes and exposed my toes to the cold winter air. I tied in to the leash, focusing on the task at hand, visualizing success. I moved out onto the line, picked up my left foot, moved into a seated position, closed my eyes and slowed my breathing. I opened my eyes, moved into the Chongo position and mounted the line with conviction. On the way to the other side, I fought like hell, missing one step, but still managing to hold on. Never giving up. I wanted it. I felt good. I sent the line. Onsight, 50m, a new length record for me as well. I stopped for a quick rest on the other side and then came back for the fullman. The way back was so much easier. The pressure had been relieved and I felt so at ease on the line that I cruised the full length with no problems whatsoever.

It is moments like this that remind my why I love the sport so much. The clarity and sense of peacefulness you have when you are comfortable on a highline, comfortable staring fear in the face. I LOVE IT! 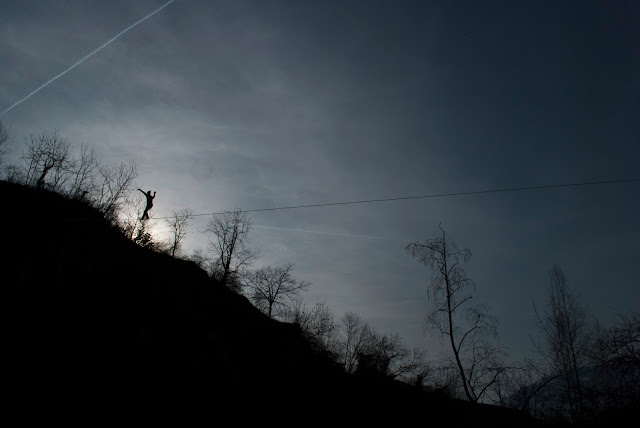 So what can I say, I started the year off with a bang. Things have only been getting better as well, with a positive outlook on slacklining in Lausanne after I met with the city council a few weeks ago, a potential sponsorship deal for Slackline Romandie, a magazine article on slacklining being published soon, and significant progress and collaboration between all the Swiss Slackline Associations. So here it to the rest of the year!!!
Posted by James Clulow at 2:48 AM 3 comments:

Woohoo! Matthieu Rudaz from Swiss Team Machine has already finished editing the film from the Niderhorn! (4 days later and super fast!) A HUGE THANK YOU to Matthieu!

Some come one and come all to watch the film "Equilibre" on Vimeo and see the team from Slackline Romandie and SlackAttack.ch in action!


Equilibre from Matthieu flash rudaz on Vimeo.
Posted by James Clulow at 2:55 AM No comments:

Niderhorn - The Slack Paradise of Switzerland!

The last time we went to Niderhorn, well, there wasn't much to see. Read this for more details...
But this time was different. The dream team, Alexis Gonin, Jérémy Folly, Sebastien Collet, and James Clulow, was reunited and this time with an additional member, Matthieu Rudaz from Swiss Team Machine, to film and photograph.

Upon arrival at the summit, we got straight to work on Saturday morning and started bolting and preparing to rig the big line between the two summits. We had originally thought the line would be about 50m long. Looking for a challenge we took my 67m of Type-18 with my 70m dynamic rope as a backup. We figured it would be some good fun. What we suddenly realized upon starting to rig, was that the line was BIGGER than we had thought. A lot bigger... It was really a stretch to pass the webbing from one side to another and we were not sure if my line would actually be long enough to bridge the gap!

Luckily, the line was just big enough to rig it. We estimated the gap to be 65m and with such a rig, it was a beastly yellow serpent. Every time you tried to stand up, huge waves would oscillate back at you from the far end of the line trying to buck you off. After much fighting from Alexis and Jérémy on the first day, we all realized that it was probably not going to happen for us on this trip. The setup was too heavy and we had underestimated the gap. The plan was to try and walk it again at sunrise for some photos, but ultimately, it would have to wait another day. 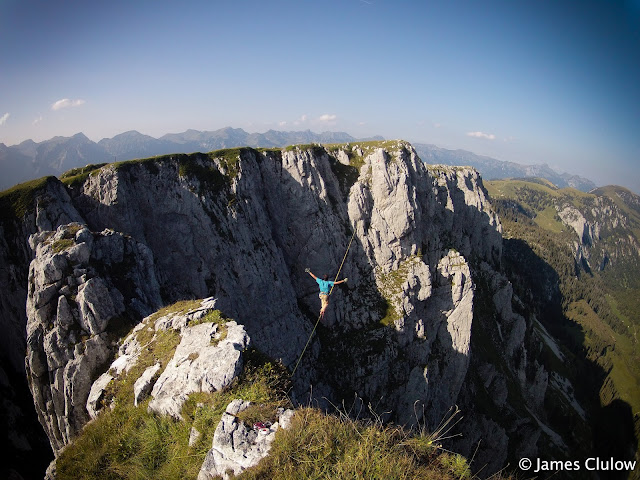 After resigning to that fact, I had gone off to take a pee and I stumbled upon a large free standing tower nearby. I continued walking along the ridge to see yet another free standing tower. I thought instantly of a line between the two. Another project found! and then ANOTHER! and ANOTHER! So much potential in this one place! The access is pretty easy, not too far from Lausanne, and there is in SAC cabin at the base. SLACK PARADISE! I went back to report my findings to the others. We had found a smaller line of about 27m long that could be rigged, but we had little battery left in the drill and were not too sure if we would have enough to drill the bolts that we needed for the line. Serendipitously, the line was close to a nearby climbing route by the name of "Walk the line" and we could use the belay as a backup thus saving us having to place too many bolts (and risking to run out of battery). With a bit of luck and "bricolage", the line was rigged in the morning. The line was named "Brico+Loisirs highline" in honour of its last minute/bricolage style rigging. All in all it was a good weekend with the team. We will definitely be coming back to that place to kick some ass on the 65m and to rig some of the many new gaps we found there!
Matthieu took a ton of video and photos and he will be releasing a short film soon. In the mean time, here is a small video of the "Brico+Loisirs highline" that I filmed with my GoPro. Enjoy!

Posted by James Clulow at 7:10 AM No comments:

Last year Alain and Jérémy established Vent de Salon, a beautiful 22m long highline in the Gorges du Dailley which overlooks the Valais below. (Check out this video of the line filmed by Benoit Bottarelli.) I went back to repeat the line with Chrislaine, Seb, Rémy and some others last year in the winter. The place is amazingly cold in winter as it gets little sun and the roaring waterfall next to the line keeps you damp to your bones. While there, we had talked about the possibility of rigging a longer line in the gorge. The line would start directly over the waterfall and stretch down the length of the gorge, eventually reaching a wall on the opposite side. It was a project to wait for the next summer and it finally arrived!


On the 29th of August 2012, Jérémy Folly and I met up with Charlie Klonowski to establish a new line in the Gorges du Dailley. The line was rigged on loose Type-18 with a dynamic rope backup and weighed in at exactly 35m long. The line was dubbed "Oû est Charlie?" In honour of Charlie's travels around the world. It was a beautiful line. So beautiful in fact, that I had to go back that weekend with Irene, Benoit, Stéphane, Michael and others to rig both the 35m and the 22m at the same time. Que du bonheur!

Here are some photos: 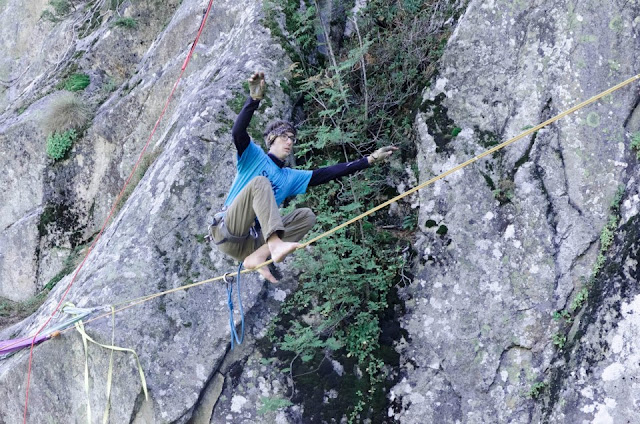 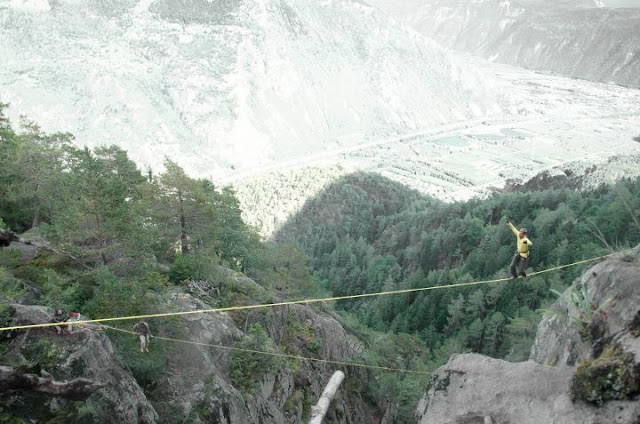 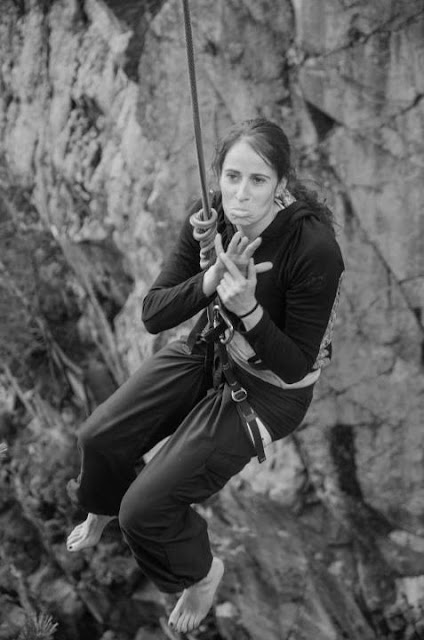 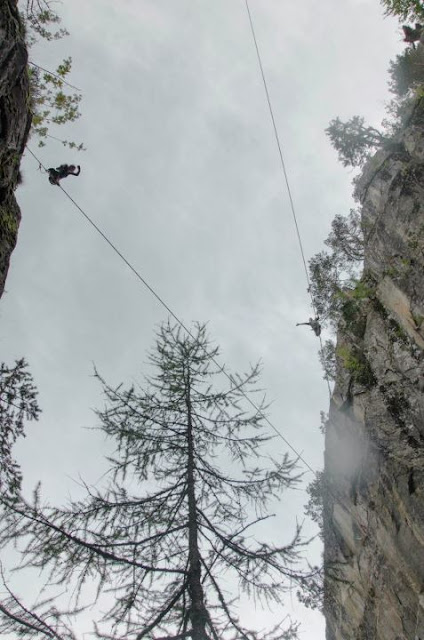 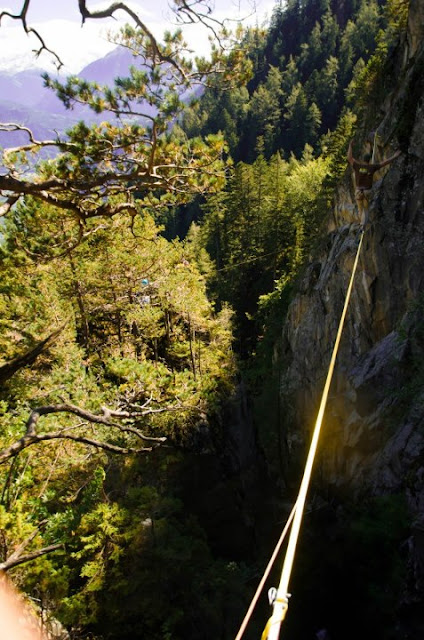 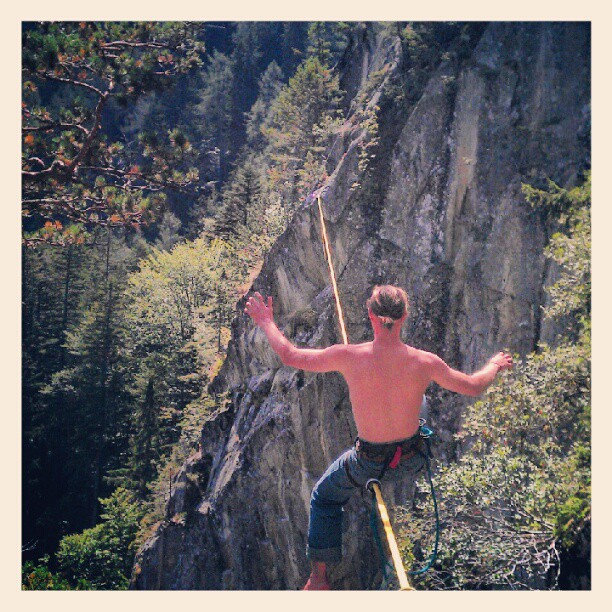 Posted by James Clulow at 5:41 AM No comments: 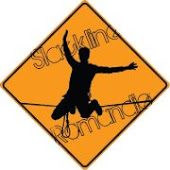 This is a Flickr badge showing public photos and videos from jamesclulow. Make your own badge here.